Sorting through all of the best solar fairy lights can be a challenge when deciding which one to get. So in this solar-powered LED fairy lights review, I will tell you about fairy lights in general before telling you what I think the best ones might be. 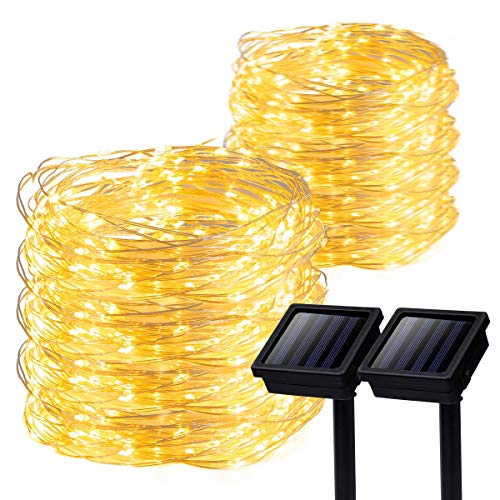 The Gigalumen lights are weather-proof, have enough run time to last through the night and they have plenty of options, making them our top recommendation. 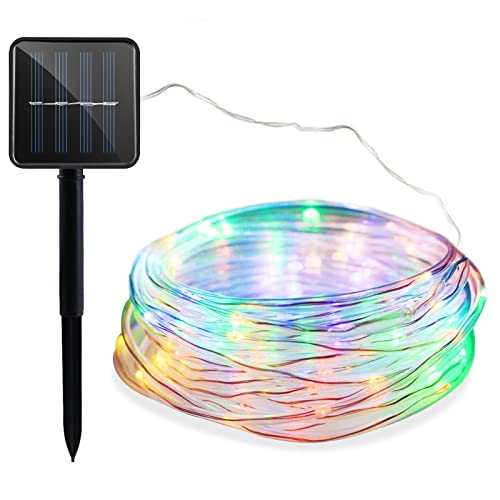 Extra bright LEDs that last up to 12 hours on only a 6-8 hour charge time make this our upgrade option. The larger-than-average solar panel can be wall-mounted for greater flexibility. 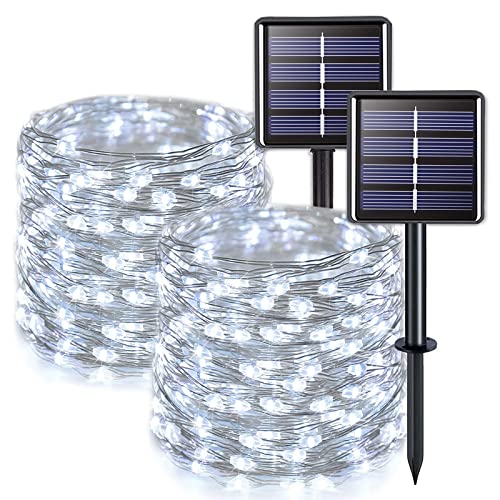 Fewer options but the still solid performance and brightness make the JMEXSUSS our value option choice if you just need basic lighting. 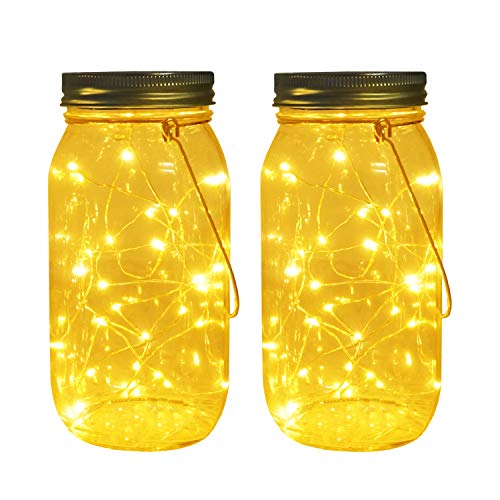 This alternative option has string lights that are “plug and play” ready for use in a wide mouth Mason jar for those of you who aren’t big on DIY projects.

When considering whether or not to buy some small fairy lights, the first question that can come to mind is what you might use them for. Besides wrapping them around a tree you can also use them to decorate the inside of a bedroom if the window gets enough sun, giving at times a somewhat Bohemian look to your room.

There is a number of simple crafts that you can do with fairy lights, including the popular one of putting them in a mason jar, or you could buy solar mason jar fairy lights already prepared. But other options for fairy light décor include outdoor canopies, lighting up a pillar, or making simple watering can decorations.

For the more adventuresome and handy people there are more detailed and time-consuming DIY projects available. Some of these can even tell you how to do complicated things such as making your own lawn lamp from scratch (Source).

What Is The Difference Between Fairy Lights And String Lights

String lights and fairy lights are commonly mistaken for each other and both come on long strings that attach them to each other, but there are a couple of important differences that can help you to tell them apart.

In string lights, the lights poke out from the string and are encased in transparent or colored bulbs. These often give enough light to make it possible to clearly see what is around them but their light doesn’t usually extend much beyond that.

True fairy lights do not poke out from the string, instead of making a lump in the string itself. These do not give enough light to really see by, being solely for decorative purposes.

What this means is that your LED fairy lights will not be prone to catching on things like string lights can sometimes do. This also makes them more flexible and bendable so you can form them or wrap them around whatever you wish to. All in all, fairy lights are much better suited for crafts and decorations than string lights.

What You Should Look For In Fairy Lights

LED is an acronym that stands for Light Emitting Diode and it is called this because of the complicated way that it makes light. Because of the different way the light works it has less CO2 emission outputs, making it better for the planet.

Another key feature about this kind of light is that it releases 80% of its energy as light and only 20% of its energy as heat, compared to other lights which often are closer to 80% heat and 20% light. This is part of what helps them last longer and is more durable than other light options.

While most garden fairy lights do have a copper string, this is a very good thing to make sure yours have for more than one reason. Firstly, there is the fact that copper is very pliable and yet can hold the shape you put it in. This could be useful if, for example, I wanted to make a heart-shape for Valentine’s Day and I wanted it to stay in that shape without anything holding it like that.

This also means that the string won’t tear, unravel, or anything else of that nature, though it does tend to mean that any knots or kinks that form in the string can be next to impossible to remove.

Unlike many other kinds of solar lights, which usually shine dimmer or won’t come on at all if there is a problem, solar fairy lights will more often start to blink on and off sporadically when something is wrong.

If yours is doing this you should first make sure that your solar panel is clean and getting plenty of sunlight, because the cause might be that it isn’t getting enough sun. The next thing to try if that doesn’t seem to help is to replace the battery since eventually, any battery will no longer hold a charge.

To help your solar fairy lights to keep working at their peak it is best to clean them every once in a while. This will get rid of any dirt or dust that may have worked its way in and will help the different parts to last as long as possible in addition to helping to keep your lights bright.

You should wipe off your solar panels at least once a month and give your system a thorough clean once or twice a year. Doing so will also sometimes alert you to any problems, such as if the battery is oxidizing (Source). 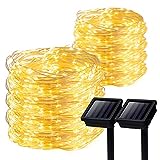 These waterproof fairy lights can come in four different colors, including blue and purple, as well as a mixed color option that is blue, green, and red. This can be especially nice if you want more variety than just white fairy lights and the copper string ensures that you can bend it into any shape. No products found. Its working temperature is anywhere between -4 to 140 degrees Fahrenheit ensuring that it should work in any weather or environment. It is also built to stay cool to the touch even when it has been on for hours, so there is no fear of getting burnt by it.

The JMEXSUSS option has nearly 33’ of fairy lights on a pure copper string so that you can do any shaping that you want to do with it. It shines for around eight hours or more, but the lights are almost four inches apart. It comes in two different colors: white, and a warm white that gives beige looking light and is a softer color. It is pretty self-explanatory to set it up, but it does not always come with an instruction manual, so when it comes time to replace the batteries you have to either figure it out, make a call, or buy a new one.

Since one of the most common uses for fairy lights is to make a sort of fairy light lamp by using a mason jar, this option has the solar panel built into a circle that will fit the top of a wide-mouthed quart jar. While it does not include the jars themselves, it does include hangers that enable you to hang up your new lights. It is weatherproof enough to last for a while without rusting even if you have wet conditions. It also comes in sets of different numbers which can be a handy thing so that you can get the right amount that you need for a certain project.

All of these backyard fairy lights look amazing, but my pick is the GIGALUMI 100 LED Solar Fairy Lights. While it is not perfect, it has everything that I would want in one of the best solar fairy lights.

Not only does it have copper wires and the LED lights, but it also has eight different settings to choose from according to what I feel like. And it is a reasonably priced option.

The part of the string that has no lights is plenty long enough for me to wrap the lights around a tree and still be able to set the solar panel in the sun. This length also means that I can slip the lights in the window to decorate my room and keep the solar panel on the outside without any lights showing outside if I don’t want them to.

The Gigalumen lights are weather-proof, have enough run time to last through the night and they have plenty of options, making them our top recommendation.

Extra bright LEDs that last up to 12 hours on only a 6-8 hour charge time make this our upgrade option. The larger-than-average solar panel can be wall-mounted for greater flexibility.

Fewer options but the still solid performance and brightness make the JMEXSUSS our value option choice if you just need basic lighting.

This alternative option has string lights that are “plug and play” ready for use in a wide mouth Mason jar for those of you who aren’t big on DIY projects.