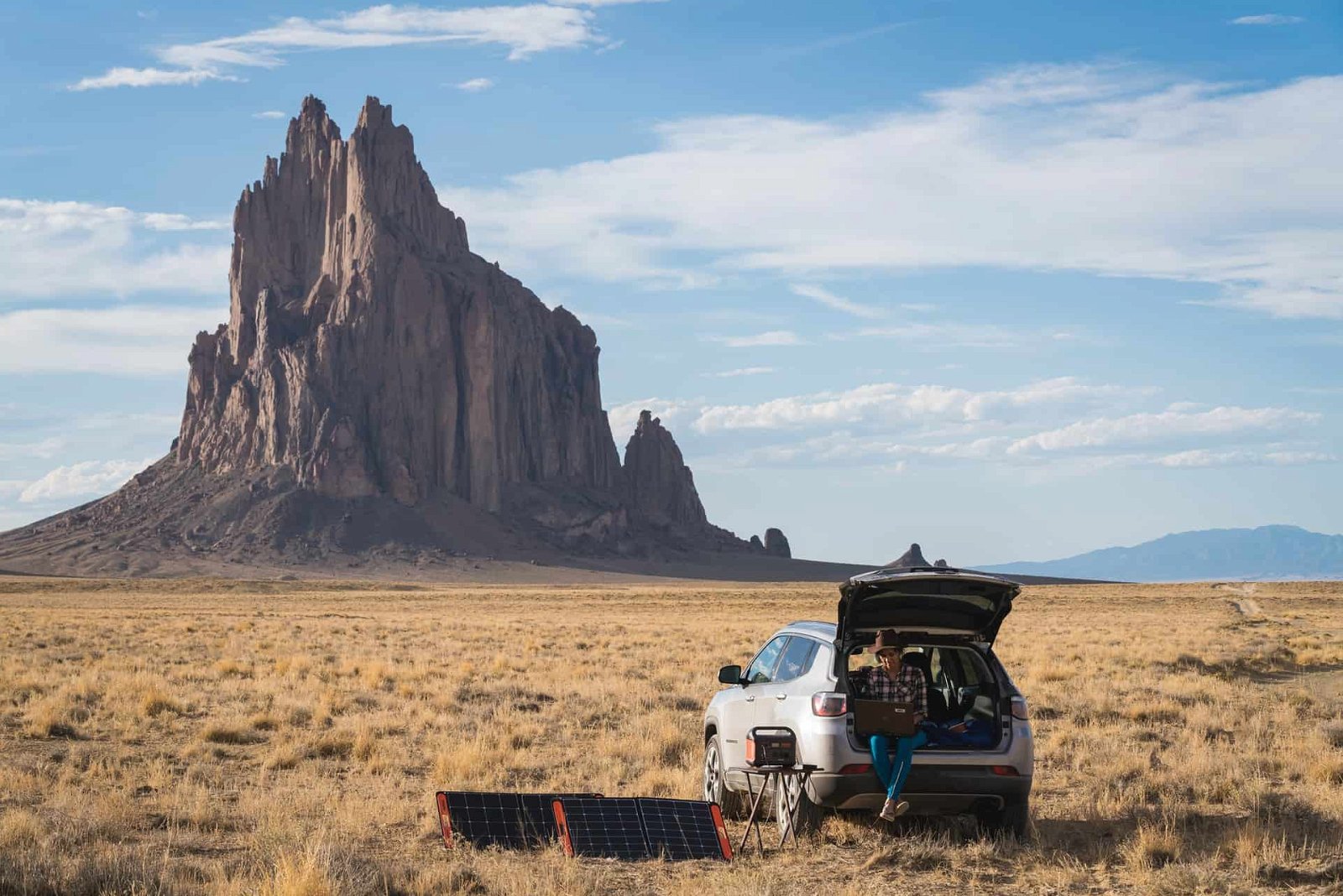 Before we go on discussing and answering questions about solar generators’ emissions, let us briefly define what a solar generator is and how it works.

Solar Generators And How Do They Work?

Solar generators are often exaggerated. In simple terms, solar generator units are types of machines in the form of a rechargeable battery that can be powered by a solar panel.

A solar generator works in a different way from how conventional gasoline or propane-powered generator runs. The mechanisms are different, as well as the technical specifications.

The inverter will then convert the DC electricity into usable AC electricity. Another term and more appropriate label for solar generators as rechargeable solar-powered batteries are coined “portable power station”.

These devices are sometimes referred to as all-in-one portable power stations as the batteries can also be charged through a regular wall outlet or car outlet. When it comes to solar generators, there are a lot of options available in the market.

There are many different company brands to choose from. The investment required will vary depending on the size, battery capacity, price, and costs of other components.

Do I Need A Solar Generator?

If most people can agree on one thing, is that electricity is a fundamental need. It helps power a list of everything and anything from everyday devices such as smartphones, lights and appliances to critically important medical devices, a small fridge or refrigerator and other food storage system.

Understandably, a power outage can get quite scary when you suddenly run out of electricity with no light in sight. Fortunately, there are solar generators that supply energy in such emergency situations as power outages.

So now it’s safe to say that yes, anyone could need a solar generator for certain situations. May it be as a backup power source for your house or as an alternative power source when you go off-grid camping.

Do Solar Generators Have Emissions?

It would be inappropriate to say that solar generators have zero emissions, as solar panels used to collect solar energy and other components are made of mined products and processed materials.

Recycling of its parts at the end of its life, the impact and risk of pollution in the environment and around the world is still questionable. However, even with all these factors taken into account, lifetime emissions from solar energy are much lower than those produced by fossil fuels.

On the other hand, unlike conventional generators powered by gasoline or diesel, it’s a fact that solar generators don’t emit carbon monoxide fumes during operation. With that in mind, solar generators can be placed inside, behind closed doors and windows, as long as it’s a dry area away from high temperatures.

In addition, solar generators do not produce much noise. Which is something that can also contribute to lower noise pollution. With all these things coming together, solar generators still have fewer disadvantages and are still considered to be a green and eco friendly option.

What Are Greenhouse Gas Emissions?

According to the EPA (Environmental Protection Agency), greenhouse gases are trapped heat that makes our planet warmer. The most common type is carbon dioxide, which goes into the atmosphere by burning fossil fuels like natural gas, coal, and oil.

Emissions are the main contributor to the greenhouse effect. As people continue to use fuel and electricity as a power source, greenhouse gases number continues to rise. This results in an increase in average heat on the Earth’s surface, which is a major contributor to issues like climate change.

How Shifting to Solar Can Help Reduce Emissions?

One of the most notable advantages of shifting to solar systems is reduced greenhouse gas emissions. Utilizing the light from the sun or solar power to energize your home, you have already reduced your reliance on electrical companies and their services.

While you can save money on your monthly utility bills and take control of your energy needs, you are also able to play your part in protecting the environment. Reducing carbon dioxide emissions and energy consumption.

Using a solar generator instead of a gas generator is an example of the simplest steps to access clean energy while reducing the amount of emissions for each use. They are cost-effective and easy to maintain. Hope this article inspires you to take charge, go solar and make a difference.