What Damage Do Moles Do To Your Garden? 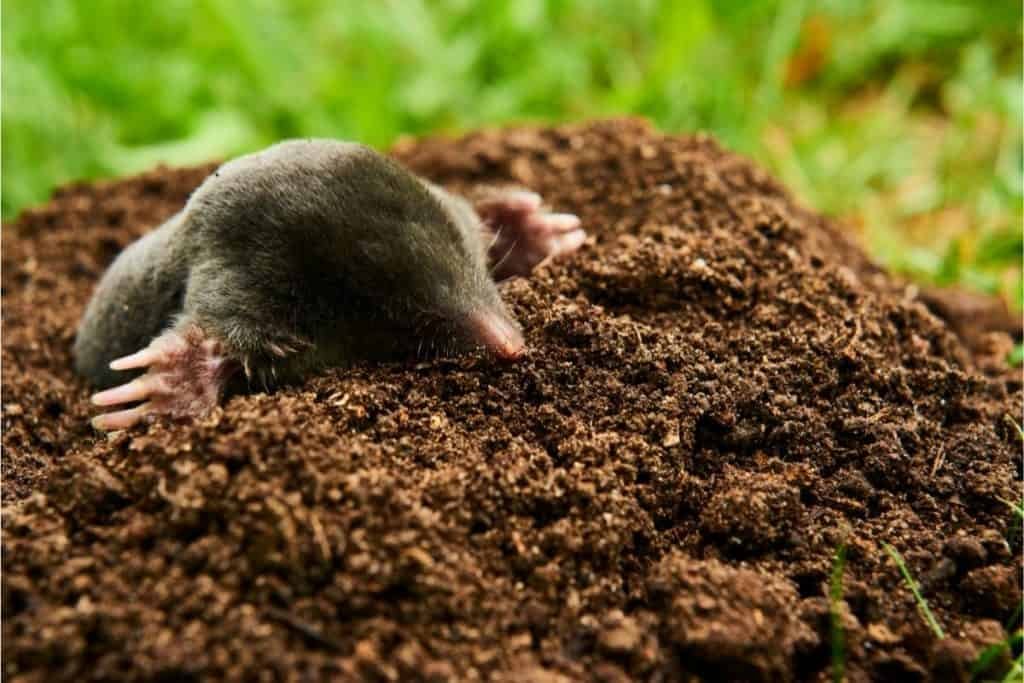 Mole activity can cause a lot of damage to your lawn, yard, or farm. This damage can range from uneven grounds to dirt accumulation, deep holes in the ground, or damage to plants, plant roots, and crops in extreme situations.

This kind of damage is not intentional but is rather a side effect of the mole’s natural and survival tactics. They are also not the full extent of havoc that a mole can wreak on your garden.

What damage do moles do in addition to these things? Let’s get right into it.

Why Do Moles Burrow Into Garden Soil?

Moles are burrowing animals that belong to the class of mammals known as insectivores. Because they consume a variety of insects like beetles, ants, earthworms, spiders, and centipedes amongst others, they have to burrow to find food.

Moles are known to be voracious eaters; they can eat as much as their entire body weight in insects each day. They alternate between digging for more food and resting. Moles are attracted to the food sources in your lawn, farm space, or yard.

Moles prefer loose soil; this means soil that is neither too damp nor too dry. Hard and dry soil is not desirable, because it is too difficult for moles to tunnel through and doesn’t have many food options.

Likewise, overly moist or sticky soil is not an option as it is not suitable for moles to dig their burrows.

Moles prefer well-vegetated areas because it not only protects them from predators, but also serves as a source of food, as moist soil is a good habitat for worms and grubs. Therefore, garden soil is perfect.

What Damage Do Moles Do?

Moles cause most of their damage by disturbing the soil. Constant digging in the soil leaves behind tunnels, holes, and mounds that can be a real mess in your yard and disturb your plants.

What other detrimental effects can moles have on your garden? Here are a few potential problems:

1. They Leave Openings for Other Animals

Due to how deep and long mole tunnels run, other harmful animals such as snakes, voles and other rodents might dwell in them, unintentionally causing harm to the immediate surroundings or to plants.

2. Their Activities Can Damage Your Lawn Mower

Mole tunnels can run as deep as 4-10 inches underground. They also form an interconnecting system of resting and feeding tunnels which are then connected to the mounds of soil left on the surface of the yard or lawn.

The volcano-shaped soil mounds left in your yard can damage not only your grass but the blades of your garden mower as well. You might also want to know when are moles most active during the day.

3. They Can Damage Your Garden’s Irrigation System

Moles’ constant need to move around and go hunt can also disturb lawn irrigation systems. The dirt and soil shifted to the surface can contain stones or other impediments that can potentially damage your weed eaters or yard mowers.

Constant soil movements can be damaging to garden plants as well as to garden crops with short or light roots.

Mole tunnels can also cause exposure to deep-rooted plants and leave an access way for voles, weasels, or other rodents to feast on them or uproot them.

Their constant and voracious appetite also means that they can strip the soil of important organisms that are beneficial to the plant and the soil’s health.

While moles are commonly associated with lawn damage and destruction, this is not entirely true in all cases or situations. In small numbers, moles can actually be beneficial to the yard or lawn.

By feeding on white grubs, moles are beneficial to young shrubs and grass, as these grubs can otherwise be harmful to them. Moles also contribute to soil maintenance. Their constant digging in several places aerates the soil and transports humus deeper into the earth.

Moles also carry mineral-rich soil from deep under to the surface, thereby providing a change for the plants. The tunnels they leave behind can hold rainfall and absorb water into deep soil spaces.

However, the damage that moles leave on your garden far outnumbers any benefits they could provide. As such, your lawn or garden would benefit from their removal.

How To Prevent Mole Damage

Of all of these methods, the use of sonic repellers is the most stress-free and self-sufficient, especially solar-powered mole repellers.

You can use these noise-making or vibration generating devices in your garden to get rid of moles. Moles hate noise and will stay far away as possible from the slightest vibrations.

These repellers can produce sounds or vibrations that will travel far in the underground tunnels of moles. To know more check: How do sonic mole repellers work to disperse rodents?

2. Take Your Pets on a Walk in Your Garden

Asides from the use of repellers, there are a few other methods that can help with mole infestations and mole control.

An example of this method of mole control includes having your household pets take regular walks. Moles are sensitive to sound, can sense the slightest vibrations, and tend to hide from noises and other sounds.

3. Change the Soil Condition of Your Garden

Moles typically prefer moist soil since it’s easy to dig through and a rich source of food. Changing the soil conditions and making your yard inhabitable for moles will get rid of them.

This can affect your plants, however, as they need the same organisms moles are after to grow and flourish.

Reducing or eliminating the food source for moles will also drive them far away, as their active digging life requires that they eat heavily and frequently. There are products designed specifically to keep the insects they feed on away from your lawn.

Avoid overwatering your yard. Water your lawns at intervals that won’t leave it moist enough for moles and also won’t damage the grass. Watering your lawn early will leave enough time for evaporation to occur, thereby leaving your soil dry.

Depending on the number of moles on your property, you can hire the services of professionals. In a serious case of mole infestation or when dealing with large mole populations, it is best to seek out the services of a licensed mole exterminator.

What Damage Do Moles Do? Plenty, It Seems

Damage caused by moles can adversely affect your lawn/garden conditions. While moles are not particularly threatening to humans, their surface tunnels, molehills, and dirt mounds make them unwanted guests on your property.

Now that you have a clearer sense of the response to, “What damage do moles do?”, you can put measures in place to stop that damage.