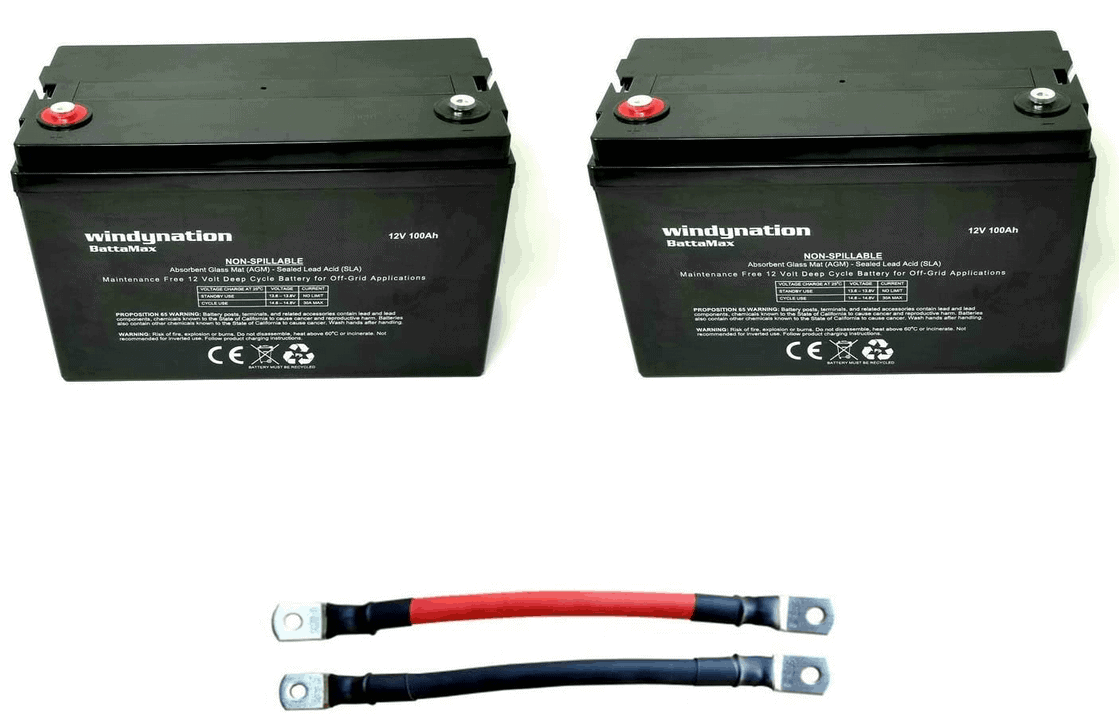 While a solar battery system isn’t absolutely necessary if you are planning on staying connected to the grid, it can help provide you with even more discounts or even allow you to go off-grid.

Like any battery, a solar battery system has power that can be drawn upon if no other source of power is available.

There are three main types of solar batteries, which are lithium-ion, lead-acid, and saltwater.

Solar Battery Systems and How They Work

As the name suggests, a solar battery is a battery that is charged with solar energy. It is used often to produce electricity when the solar panels aren’t getting enough sunlight to keep up with the load demand.

Solar batteries work by taking any excess energy that you aren’t using, but your solar panels are producing and storing them until a later date. The amount of energy that can be stored depends on the size battery system you have.

There are three main types of battery storage for solar power. These are lithium-ion, lead acid, and salt water. Each one works slightly differently and has different efficiency percentages.

Of course, reducing your carbon footprint is a huge benefit. Solar energy is considered a clean, green, and renewable energy source. This allows for better environmental protection and more independence from harmful carbon-based fuels and energy sources such as fossil fuels and coal.

If you get a big enough solar system and energy storage system, you can be completely off-grid and power-independent.

While not everyone can afford this, you can still rely less heavily on your utility company by investing in solar battery systems. For example, with a storage system, you can still have power, even when the grid is down.

This allows you to still have heat, power important appliances, and run lights. If you have a security system, it can even keep that powered.

One of the major advantages to homeowners is independence from the grid. While solar panels alone can seriously offset most utilities, peak hours are often when the sun goes down and solar isn’t as useful.

Peak hours are when people are charged higher rates for their utilities since many people are using power at that time. Having a battery system allows you to still pull power that your solar panels have created, but at a later time, that is more beneficial for you.

When the grid is shut down, the energy storage systems will kick on, preventing power from going to the grid, which keeps any workers safe, while still giving you power until the battery runs out.

It also provides security if you live in an area where power is unstable and can go off without warning, especially during peak times.

How Much Can a Power Outage Cost?

Power outages are no joke. And with high demand causing blackouts due to the grid being overwhelmed, and constant maintenance, power can shut down a lot. The summer months are the most common reason why the power can shut off in the homes of customers.

This is usually due to high temperatures causing many people to run air conditioning. Since heating and cooling take the most power, this is when the grid is most at-risk of shutting down.

Not only can this be a major inconvenience, but it can put a lot of cost on your shoulders. For example, you may need to invest in generators and always keep fuel around. However, in some states, you can’t even have a gas-powered generator.

For businesses, estimates are that thousands of dollars are lost an hour due to loss of productivity and revenue.

These estimates are highly variable based on the length of the power outage and whether any surges destroy any technologies, if emergency supplies have to be used, if food is spoiled and has to be replaced, or if alternate housing has to be found.

Net metering is a way to get a little more value for your solar panels and a way for the government to provide a few more incentives for people who get solar panels.

Net metering is when you send your solar power back through the grid. The power then gets sent back to you, but only the amount you need. The rest gets used by the utility company.

This provides benefits to both the homeowner and the grid and it allows the grid to have excess power when needed. Plus, the utility company pays you for the power that you don’t use, so not only do you save money on your electricity bill, but you get money back.

Having a battery system allows you to still do this, but your excess solar energy will first go to filling up your battery, and the rest will be sent to the grid.

Time-of-use (TOU) metering depends on energy demand. During peak hours, the rate of electricity goes up. The amount you get paid for your excess electricity depends on what the time-of-use cost is at that moment.

This means that you may get less money for your power.

While having a battery doesn’t eliminate this possibility, it does allow you to reduce the costs of your utilities, by still having power during peak hours even if it is dark or cloudy.

By using a battery, you can draw on saved power during peak hours, which can reduce your bill much further than just having a solar system.

A demand charge is a fee that you have to pay on top of your electricity bill to maintain the electricity in your home. This charge is based on how much power you typically use per month, measured in kW.

The more power you use at once, and use consistently, the higher your demand charge. This charge can account for anywhere between 30% and 70% of your electricity bill a month.

Having solar panels can reduce your demand, but only at certain times. Having a battery gives you the advantage and control to keep your demand low at all times of the day and year.

How to Choose a Solar Battery

When choosing a solar battery, these are some of the features you want to look at.

Lithium batteries are considered to be the best residential batteries available at the moment. They can handle any solar inconsistencies, can handle over 5,000 total cycles of charging and discharging, and you can drain the battery fully.

Additionally, they are also more efficient, with around 95% efficiency, and need little to no maintenance.

While this is all great, this does mean that they are very costly, and may easily be outside someone’s budget.

Lead-acid batteries are older technology. While they are tested and work great, they aren’t as beneficial or long-lasting as lithium-ion batteries.

They can’t be discharged more than 50% without reducing the longevity of the battery. Lead-acid batteries usually have about 200-900 cycles. This means, with constant use, they can last a few years at most.

Finally, lead-acid batteries have to be checked frequently to make sure they have water in them. Failure to do this can lead to decreased performance and shorter battery life.

However, they are much cheaper than lithium-ion batteries, making them much easier to purchase for someone on a budget.

However, they are still costly, and may even be more than lithium-ion batteries. They are also new, so more research and optimization are needed.

The best companies to look at for solar batteries are:

Can you go “off-grid” with a solar battery?

What are the benefits of adding a solar battery to your solar power system?

Electricity During Storms, Severe Weather, and Other Power Outages

Things like storms, severe weather, and other severe situations can cause power outages or lower efficiency from your solar panels. Having a battery backup can help make sure that you will still have power in these situations.

How much energy can be stored in a solar battery?

Solar systems can hold anything from 2kW to 10kW of energy, but every battery is different.

How do solar batteries fit into the larger electric grid?

There are things called grid-tie inverters that help connect your solar system to the grid, while still allowing you to use your batteries for storage and emergencies.

How much does it cost to add a solar battery to your home?

Are tax credits offered for the purchase of a solar battery?

All parts of a solar panel system can get federal tax credits, including all types of battery systems and their installation of them.

What is the battery life of a home solar battery?

The battery life of a home solar battery depends on the size of the battery you have, and how much power you are drawing from it at any given time. With so much variability, it is hard to determine exactly how long a battery will last for you.

However, if you are planning to go off-grid, the recommendation from many experts is to get you a battery that can last you a minimum of three days without new power, and at least powering the basics.

What is the lifespan of a home solar battery?

Most solar batteries, depending on the type you get, can last anywhere between 5 and 15 years.